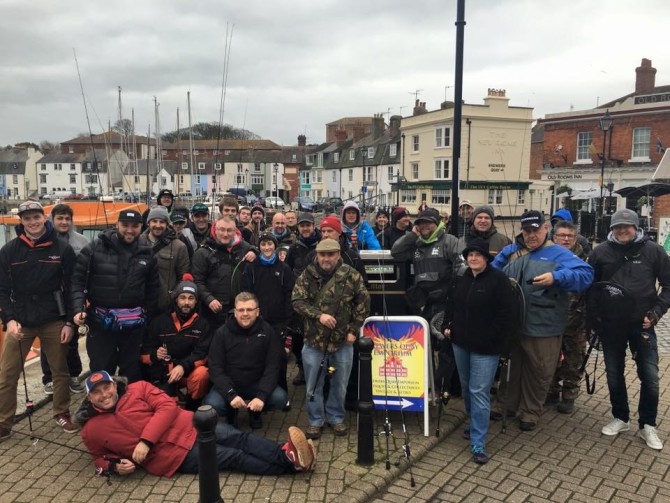 Hats off to Andy Mytton for a first class LRF competition and meet-up, drawing in anglers from all over the country. Huge turn-out for any time of year (I think it was 34), but for December, with 40mph winds roaring away it was exceptional. Lots and lots of friendly faces, plus a few new to the saltwater side of light lure. Everyone appeared to be having fun.

Thankfully the wind was the only ingredient that didn’t play fair. Importantly there were lots of fish in and around the harbour, highlighting how well the water temp has held up this year. I saw or heard of 14 species caught on the day – a week into December! Ballan Wrasse, Corkwing Wrasse, Goldsinny Wrasse, Tompot Blenny, Gobies, Smelt, Pollack, Pouting, Whiting, Bass, Scorpo, Flounder, Herring and Luke Fox even found a lone Mackerel! Just goes to show, while we all make excuses to stay in the warmth this time of year, if you get out there and fish, there is still lots of fun to be had.

The fishing was actually pretty memorable. Dan and I braved the windy side of the harbour and chanced upon a big shoal of sizeable (27cm+) Whiting. They were hitting everything with great force. No doubt competing within the shoal. Giving us some great sport that even got our drags singing. Best Whiting fishing I’ve had on the lure. Might well be back. Would love to replicate it without the wind and scale down further still.

On a day where everyone was a winner, there were of course official winners too. In third place was Mike Kennard with 6 species. A few of us were tied on six, but Mike took it on points with a beautiful Flounder doing the damage. Nice one Mike. No surprise at all to see Luke Fox on the podium taking second with 7 species, as well as most unusual fish for his December Mackerel. I’m sure they followed him all the way from Cornwall… hold on… I’m having a deja vu… In first place… Steve Collett. Steve applied his skills as well as ever to keep fish coming all day, notching up species as he went. Steve also secured a beautiful Flounder early on to increase his points, before notching up a further six minis. I feel this is an incredibly important result, as it demonstrates how well skills translate from fresh to salt and back again. I really hope Steve’s win translates into more freshwater lure anglers trying out Light Rock Fishing in the future. Well done Steve. #Solid

Huge thanks must go to all the generous sponsors (and there were a lot!): Fosters of Birmingham, Sakura, Fox Rage, Daiwa, Fin & Tide, Dorset Fishing Rods (DFR), Herakles, Savage Gear, Marukyu & HTO. Anglers really do appreciate the support and it gives us a chance to try out new gear and find new favourites. Thanks once again.