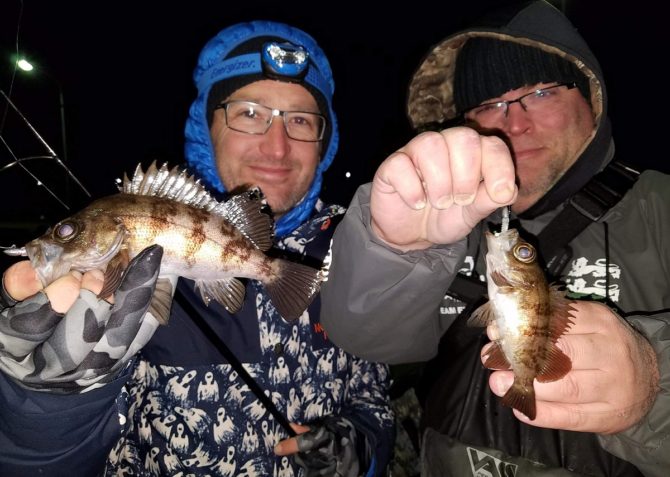 With evening descending upon us and darkness setting in, it was time to activate ‘Plan Mebaru’. Excitement within the car found another 10% as we scrabbled around, trying to prepare our hastily purchased head-torches.

Mother Nature wasn’t going to make it easy for us though. I got the feeling that the strong wind was affecting Masa and Shigehiro’s plans.

As we rolled up to our first mark, a small harbour, there was a loud exclamation from the front seats. I guess the frustration of another angler being on your preferred mark translates into any language! This was the first time I have experienced the popularity of angling in Japan first-hand. Considering it was windy and cold (around 0C), combined with the distraction of the world’s best fishing tackle show ‘down the road’, it was busy. Light Game is a big thing in Japan. I mean, I knew that of course, but here was the evidence with my own eyes. Next observation; Japanese anglers are A LOT more polite than British ones. Not at any stage in the day’s proceedings did we encroach on another angler’s space. Regardless of how good the fishing potential was.

We opted to run-and-gun one side of the harbour that was floodlit. I remember one of the others had an early fish, but a side-wind was making light game hard with big bows of line. George and I were busy decorating the local’s fishing boats with jigs. #standard

The benefit of fishing an island is that you can always get out the wind. However, a lot of anglers have the same idea. For the first time it dawned on me that anglers are very similar to fish. We both congregate in certain areas based on the prevailing weather conditions. It’s just you don’t get to see that in action very often back home.

Masa had already talked me though the technique for Mebaru. Fishing around the floodlights, you flick out a 1.5 to 2″ straight-tail plastic. The water conditions were crystal. And I mean gin-clear. So colours were almost transparent with a faint hint of colour or sparkle. Masa had put me onto the Rally by Jack Nakamura Worm – his current lure of choice. And of course with nothing else to base my confidence on, I followed suit.

Mebaru can feed at any level up the water column, so this is a seek-and-destroy mission. As much as I find myself saying it, I very rarely search the water column with anything else other than a metal. I guess I’m not alone in finding confidence fishing the bottom during the day, and the surface during the night? Something I need to re-examine.

So you flick out the lure and count it down. Flip the bail-arm over and slow retrieve. There isn’t an action. It’s literally slow retrieve. In fact I was politely told off a couple of times for adding flicks here and there. Again, we know this, but it really cemented why Mebaru rods have soft tips. Because it’s a retrieve method.

So your first job is to get a pluck, giving away the depth of the feeding fish. Then it’s a case of maximising the lure’s time in the kill-zone by utilising the correct retrieve rate. When you eventually hooked a Mebaru, the tip would load up and the fish would violently head-shake all the way to the surface.

George’s first Mebaru and mine were of course memorable. It didn’t matter about the size, which is the real game with Mebaru. We both perfected our styles through the session and a few hours in we were catching a steady stream of fish, and it felt good.

Now, over the last 12 months, with the distraction of my boat and all that brings, I can admit to losing touch to some degree, about the latest fashions in Light Game. But it hadn’t escaped my notice that hardbaits had become the cool way to catch Mebaru. So stupidly perhaps, I came to Japan with the ridiculous notion that I would like to catch a Mebaru on a hardbait. Ignoring the fact that it was day one of my apprenticeship, I switched up and tied on a tiny, clear, solid hardbait, by Osamu’s Factory.

The tiny plug only weighed 3 grams and sank at a different rate to my jighead offering, so the whole process started over again. I definitely didn’t have confidence in my method, but I knew there were fish around and the conditions couldn’t have been any better. I just needed to replicate what I was doing with Jighead.

And then it happened. A tap and somehow I manage to resist the temptation to do anything other than maintain my retrieve rate. The rod tip suddenly vibrates violently, signifying that the fish is hooked. It’s one of those moments again. Time slows down somehow. I’ve stopped breathing and every single ounce of effort is focused on smoothly retrieving my delicate prize without incident.

As our night’s adventure came to an inevitable close, it needed the perfect ending. A double-hook-up between George and myself resulted in a pristine pair of fish, including my biggest Mebaru of the session. What we didn’t know is that we’d both switched to HTO lures. One to the Knight Worm and one to our homegrown Mace. Perfect.