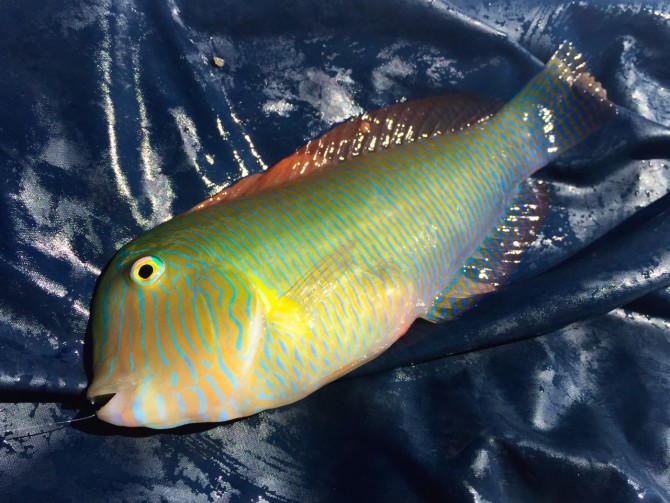 Back from our summer holiday in the Greek Isles and the fishing was as fruitful as always. It was my first time to Skiathos but finding fish was easy. They were everywhere!

This year I made a decision not to take any flavoured worm baits (you know the ones) and you know what, I couldn’t have had any more bites on my unflavoured plastics. The water is so clear, movement alone is enough to bring in fish from a good few metres away.

Fishing time was actually very limited this trip. In all honesty, the fishing was so good in Ireland the week before, I wasn’t desperate to fish – unlike the other 51 weeks each year :0) I did however do a lot of snorkelling and as ever it really got the mind cogs whirring away, watching various fish species going about their business.

Sessions were limited to an hour down at the commercial port near the airport and a day out on a self-drive hire boat. I didn’t even scratch the surface at the port. It was a lovely looking mark. Natural shoreline into sea grass, into very deep water very quickly. And a concrete jetty to fish from. Best of all the port is naturally protected on each side by land mass – it’s basically a natural channel. Consequently it is a dead-end and the amount of bait fish stuck in there was immense. Would have loved to see what goes on after dark. Speaking of baitfish, the key resident species appeared to be Sand Smelt. I’ve never seen so many. It was almost magical snorkelling through the vast shoals found around the island.

All the usual suspects were at the port, but the highlights were the elusive Mediterranean Cardinalfish and I managed to find a decent sized Scorpo in the shallows, hiding in the sea grass. Probably a med PB for me. Yes, there were Comber :0)

We planned the self-drive boat around the weather forecast and got lucky. It was so calm on the morning we went afloat that the operator allowed us to motor right around the island. The north side can get battered by the prevailing wind. However, I didn’t fish that side. We were just pleased to see the north side from another perspective.

We kind of hopped along the south side, sometimes stopping to fish on the drift and other times anchoring to snorkel and fish.

It was generally the same species you always expect in this part of the world. However I was enjoying it because I’d chosen to stick with unflavoured plastics. Consequently I was spending more time with various lures that might not normally get a look in. It was great fun. There were a few exceptions to the average species count.

Second only to the Smelt, was a never-ending stream of mini Garfish (not sure which species). After the first few it was actually more fun seeing how many you could draw in to the boat. I’d say the average shoal following the lure was 30+. All the time I was daydreaming about what might prey upon them.

Next on the surprise list was my first Cleaver Wrasse. I only knew what it was because Lee Goddard had caught one, incidentally from Skiathos, a month or so earlier. It reminded me a little of the Venus Tuskfish of Australia. All incisors and forehead. That was cool enough already, but this fish soon accelerated to superstar status upon seeing some wicked behaviour while snorkelling on our last day. I was swimming along the line between sea grass and sand at the bottom of a beach when I saw a Cleaver Wrasse a foot or so off the bottom. In an instant, and I mean split second here, the fish had disappeared. The only clue was a puff of sand. I floated around for what must have been 10 minutes or so, trying to locate a burrow or something, but to no avail. I later found out while researching this fish that it has the ability to evade capture by ‘swimming’ under the sand. When you see a Cleaver Wrasse in person you realise how thin they are. Literally like a cleaver. And I guess that allows them to cut in and under the loose sand to hide. What a super cool creature!

We chose to spend the last hours of our hire among the superyachts moored in the bay near our accommodation. In fact we anchored in very close to the land, at the west point of the bay. There were patches of sand, rock and sea grass. It seemed to have all the ingredients for a final finale. The cherry on the cake was of course the small Dolphin Fish that I wrote about in my last blog. It literally jumped into my swim (twice) – I guess it was chasing baitfish – to the extent that even the missus (a non-angler) was alerted to it.

I won’t repeat the story. It was obviously a dream capture and a massive highlight for my holiday in Skiathos.

Skiathos is a beautiful island. A manageable size for a week away. The food is excellent, as is the Greek hospitality. We will be back!