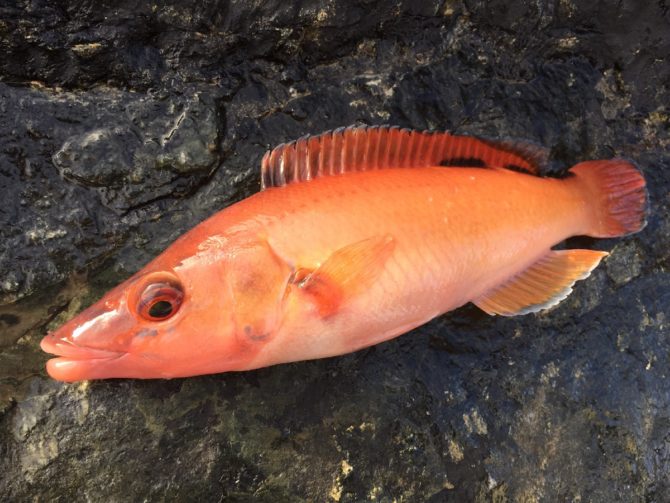 With the Cornish Lure Festival cancelled for 2017, Dan, Chris and myself decided to fish it anyway! And so we began our lure-only species hunt around Cornwall for a few days. While it wasn’t a comp, it certainly felt like it at times. We fished pretty hard, but not being confined to a rigid 48-hour window it was definitely more relaxed with plenty of breaks for pub food, tea and sleep!

We have accumulated a fair few marks over the years we’ve been fishing the festival, but with the comp off it gave us the opportunity to experiment with new marks. We found some great new areas to fish and I’m pleased to say a couple of new species.

Ahead of our adventure we had all hoped that we might achieve one or two ‘firsts’, and that we did. The first was totally unexpected. Not even on our ‘possibles’ list. But early one morning, as I stared into the depths looking for a Goldsinny, I spotted something different. Very different in fact. A bright orange fish with black and white on its back. It was a Cuckoo Wrasse! I didn’t believe my eyes. It needed a bit of persuading, but eventually I was able to tempt the fish into striking and after some careful netting by Dan, the fish was in the net. I was on cloud nine. A shore-caught, lure-caught Cuckoo Wrasse has been on my wish list for a very long time. What a stunning creature.

One of the objectives we had planned was to try for a lure-caught Turbot. I’d dropped one in my very first CLF event and we’d never really tried for them after that. So with a little bit of intel from my team-mate, Jake we fished a new mark. Interestingly without previous success to drive any tactics we all fished different rigs and retrieves. I caught a couple of small Flounder but it was Chris that was first to crack the code and reel in a beautiful little Turbot. Our second ‘first’ of the trip! Dan persisted beyond our tea-break and was eventually rewarded with two Turbot in quick succession. A first for him also.

I had to wait until we revisited the same spot at the end of the weekend when the objective for Dan and Chris was ironically, Flounder. I was pleased to finally catch a miniature Turbot. I really love this species. Ecstatic.

Those were highlights among highlights. Other high-points were an unexpected Cuttlefish. Always a pleasure. Rock Cooks always brighten your mood with their bright blue faces. This year we had them at three marks. Nice to see them doing well. We got to sight-cast to Dragonet. That was pretty special. The image of how these small fish stalk their prey will stay in my mind. Also, an hour fishing for Giant Gobies was also a highlight. Each of us scouring a shoreline at low tide, seeking out the right kind of rock pools and tentatively pitching an accurate and delicate cast to each. If your skill was up to it, there was a high chance that all hell would break loose as one of these huge gobies would hammer the lure and retreat back under his rock in a split second. Hit-and-hold fishing in miniature!

So. The result of our long weekend in Cornwall? With fine weather opening up all the intended marks I managed 20 lure-caught species. Way beyond my expectations. Absolutely stoked. The team total is even more impressive at 24. I missed the Leopard-spotted Goby, Thin-lipped Mullet, Sprat and Pouting.