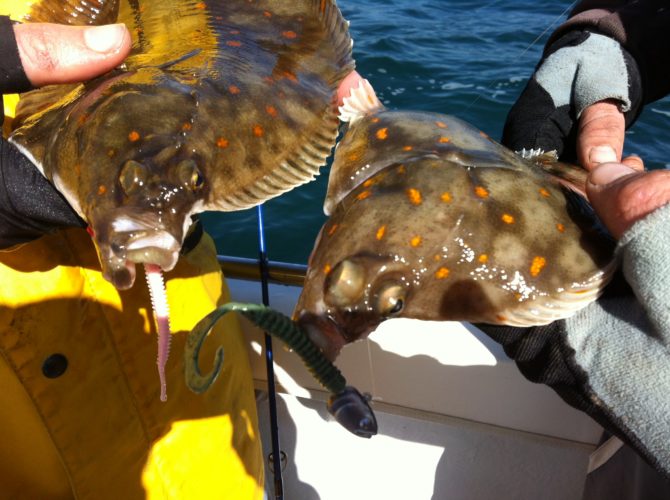 I admit to doing flatfish a disservice over the years, traditionally Plaice fishing in my part of the world was a wait and see affair. Yes I would decorate traces with beads and sequins and yes I would use huge spoons to attract a fish to my worm baits but I never considered them true predators, this as it turns out could not be further from the truth. Of course these were the thoughts of my pre-lure days and now soft plastics have turned sea angling on its head Plaice along with most other species are a very real target and this spring fresh from a very long winter we were ready for our first real assault on the red-spots.

This was my first real go at the Plaice this year but the boat had seen a couple of fish courtesy of one of my fellow boat-ownees Pete Bakers’ efforts on bait last weekend so along with the Adam Kirby (the third wheel in our boat trinity) we knew we stood a good chance of at least locating a fish or two.

The weather forecast was good if a little cold and the tides were perfect for lure-ing so we headed to our Plaice grounds in optimistic mood. I started off fishing with my standard Plaice tackle baited with worm hoping to find a few fish and then switch over to soft plastics but we could not buy a bite, with the tide slackening our lure window was about to open and apart from one small Plaice we were struggling to find fish on bait let alone lures and with this in mind we headed a few miles East to see if we could force our luck. We were glad to see a landing net being used on another boat so once we had picked our mark down went the anchor and out went a few baits while I set up my lure fishing rod. I had decided to fish Ecogear Aqua Milfles coupled to an Ecogear Iwashi 14g head, the thinking being that I had caught a Plaice during an HRF Wrasse session last year on the 3″ Aqua Milfle so I knew I stood a chance and it sat well on the Iwashis’ 1/0 hook. So I lowered my lure through 17 metres of water and attempted to get the feel of of what was going on, my little Hearty Rise rod is tailor made for this type of fishing sending every knock of the lure on the bottom as I tried to paint a picture of what my lure was doing, I wanted to lift it about 30cm off the bottom and lower it back down letting the tail of the lure flutter and hopefully make its presence known to any hungry flatfish. A quick bite signaled some interest and I continued to work the lure until I locked up, the rod arched over and the unmistakable thump-thump-thump of a flatfish on the rod tip told me I was attached to a Plaice. My first fish of the day on a lure was soon in the net, a below average size fish of a pound or so but it fought very well so a quick photo and I put him back keen to see if the trick could be repeated. Repeat the trick we did, within the next half an hour Adam and I landed half a dozen Plaice in quick succession but our small slack tide window meant we had no time to pat ourselves on the back or even compare notes. For want of a better phrase we were “in the zone” and I only gathered my thoughts when we upped anchor to drift for a while to cover some ground. As we motored along I cursed myself for not taking better photos or getting some stuff on video but we had literally waited and planned this for a year, for now at least getting some footage or better pictures would have to wait. What followed was nothing short of the best Plaice fishing I have had, Plaice after Plaice were inhaling my lure. Sometimes I wouldn’t even feel a take as a Plaice would take it on-the-drop, albeit close to the sea bed, and I would simply lift into a fish before having a ball playing them up to the surface. You may not think of the humble flatfish as a sport fish but my aching left arm will testify to fact that on the correct tackle believe me they fight hard. My best of the day on a lure was maybe a touch over 2lb, all but one went back as they were so perfectly hooked that I could shake them off at the side of the boat and they all swam away strong. I dropped a cracking fish way bigger than any I landed that day on a lure that has has me wondering since but apart from some angler error misses the hook up rate was as good as if not better than bait. We also tried Berkeley 6″ sandworms and Large Power Isome worms and they caught fish but in truth the Aqua Milfles stole the show, that tail is too much to refuse! 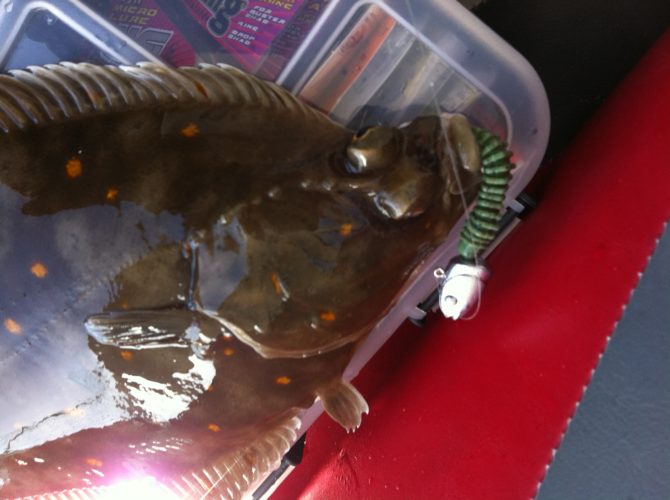 Well eventually the tide picked up and I had to put the lure rod away, but it gave me some time to sit back evaluate what had just happened, best part of 20 Plaice on lures/artificial bait using rods rated no heavier than 14grams and 6-8lb braid. Proper sport, proof that it could be done. 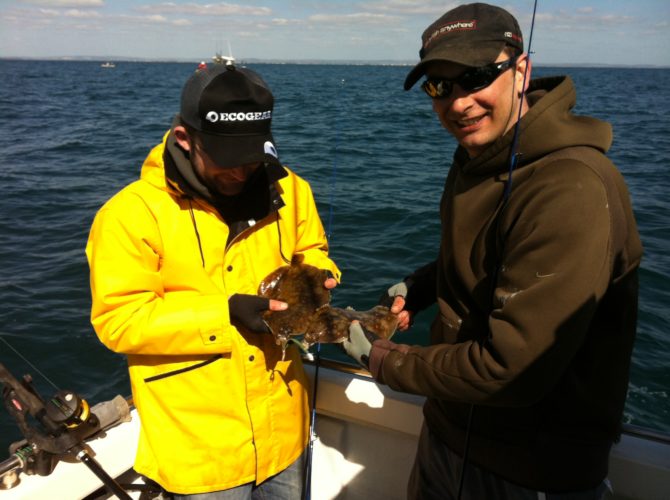