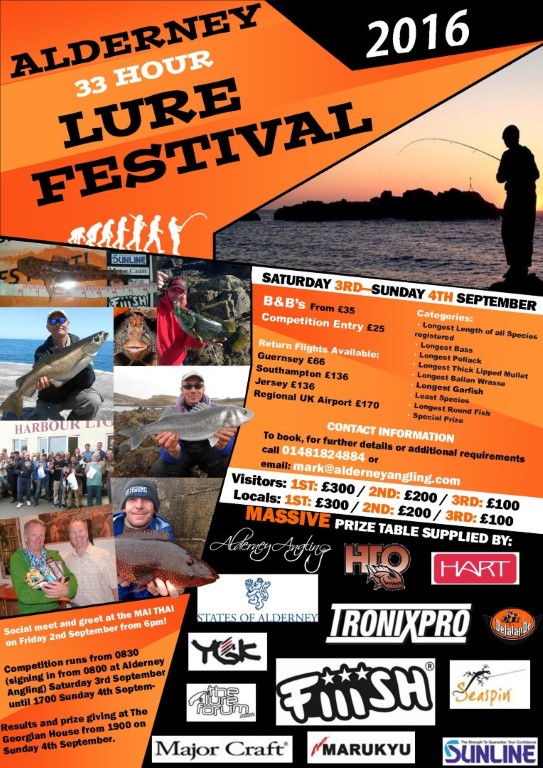 Extremely pleased to confirm that Dan, Chris and myself have just booked our flights for this year’s lure festival on the fishtastic island of Alderney!

This is the fourth year Mark Harding of Alderney Angling has hosted the event and it’s always extremely well run. Mark works extremely hard to make these a success.

The format of the competition is a species hunt using lures, although there are many prizes for the largest fish recorded during the event. Despite Alderney’s relatively small size, it’s the perfect location for a species hunt. Positioned the other side of the English Channel it is regularly frequented by a huge variety of species. Relative oddities like Cuckoo Wrasse, Giant Goby, Leopard-spotted Goby, Couches Sea Bream and even John Dory can be caught from the shore here. But really, Alderney is better known as the big fish island, so there’s always the chance of an outsize Pollack, Wrasse or Bass too. And when I say outsize, that’s Pollack to 16lb, Ballan nudging 7 or even 8lb (5lb is relatively common) and Bass well into double figures – all from the shore!

We’ve had a number of unforgettable angling experiences on Alderney. The place is unlike anywhere else I’ve fished in the UK. Whether it’s fishing a beautiful sunrise, surrounded by Gannets diving into the fish rich waters, or gaining a glimpse of your first Puffin or blonde hedgehog – Alderney is special. It’s also a friendly little island. You notice it from the moment you check-in to Aurigny, the local airline. No problem with rod cases. Nothing’s too much of a problem. You feel the everyday stress fade away the moment you step on the plane. In lots of ways, Alderney manages to hold on to a slice of ‘the good old days’. Both the pace of life and the fishing!

Alderney Angling is one of the biggest mail order tackle businesses in the UK. Consequently the events are well supported by tackle brands as well as Mark himself. You might even win some cash! (that doesn’t happen too often in lure angling)

Please consider the event. It does cost a bit to get out here, but Mark has arranged a good rate with Aurigny (use the code ‘tronix16’) and it’s the kind of place you should add a couple extra days for pleasure fishing. We had insane wrasse fishing last time.

Anyway, here’s a couple of links to write-ups I did in previous years and if you have any questions, please go ahead and ask either myself, Dan or Mark himself.