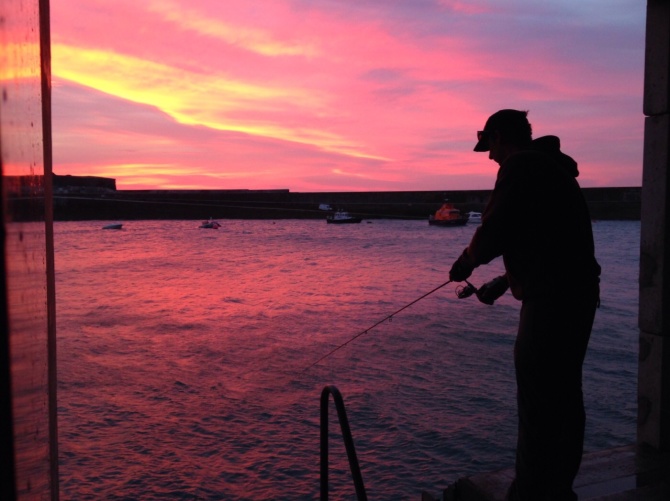 The weather gods were not best pleased with the group of anglers that ventured out to fish the 2014 Alderney 24 Hour Lure Only Species Hunt. Strong easterly winds hampered everyone’s progress the whole weekend but did nothing to dampen everyone’s enthusiasm. Alderney has a lot to offer, even in tough conditions.

With nearly £2000 of prizes on offer it was well worth getting a little windswept. Not to mention any gems that the fishing might throw up.

Our practise day quickly turned out to be the best days wrassing we’ve ever had with upwards of 50 fish up to 4 or 5lb. Alderney has a lot bigger fish guarding its shoreline. Excitement was heightened with any cast made having the potential to lead to a 8lb+ wrasse. Nothing beats that first hit from a big Ballan!

There are obvious comparisons to be made with the Scilly Isles, however Alderney’s trump card is its Bass fishing. Bass fishing has been good this season – despite the headlines we have all read. Sadly (not really) the wrasse fishing proved so addictive we didn’t actually get as far as targeting them. Next time!

All too quickly it was competition day. Seems odd to say that now, but with so much to fish for and oh so little time.

With the wind coming from exactly the wrong direction, the breakwater was almost unfishable. Those that made the call to start there before the wind reached full speed did well on the prize table with decent Pollock and Garfish claiming quite a few prizes (on length).

Species hunting was hard in blustery conditions. We really had to oversize weights to stay in touch – not ideal for mini beasts. But the real problem was water clarity.

In hindsight, we should have fished harder, earlier on. With the best harbour marks in the face of the easterly wind (rather than being sheltered by the breakwater), the water clarity became worse and worse through the 24 hour match. Easy for me to say that now, but I think it took me 23 hours to accept that this was the problem! #tired

To some, I’m sure a 24 hour species comp must sound boring but it is bizarre how precious each and every minute can be. At 23 hours 30 minutes I was ‘nowhere’ with a hard won 6 species. But with a slight change of tactics to improve my chances in the murky water I increased bites and before accomplishing my target species of Corkwing, I spawned out a bonus Giant Goby. Commence dancing around the quay!

Literally nowhere to 3rd in the dying minutes of a 24 hour match. That is why I love (and hate) this game :0)

Disappointing by Alderney standards. But exemplary by hospitality, camaraderie and sheer fun. It’s clear that Alderney hasn’t yet shown us everything she has to offer. I can only imagine how awesome that’s going to be when she finally decides to show us a little more. And that’s why we’ll be back next year.

Congratulations to Ross Johnson for a masterous win and Dicky for battling it out for second.

Special thanks to this year’s sponsors. Alderney did you proud: