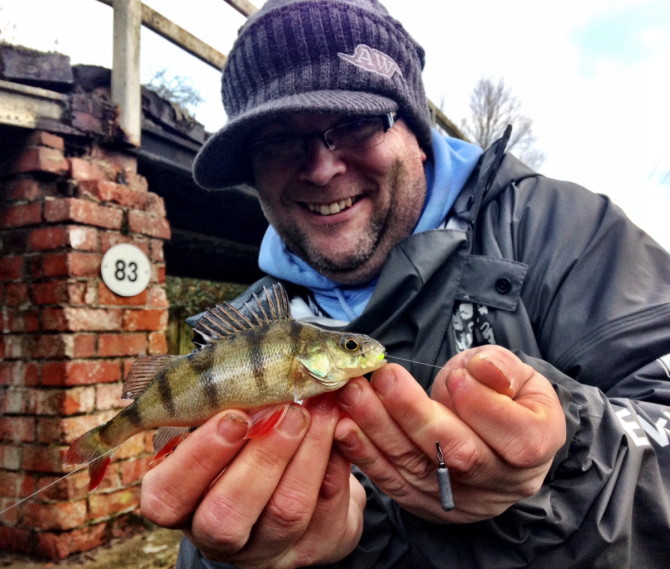 Without doubt, George Cunningham has had a huge influence on the state of light lure fishing here in the UK. George’s homegrown HTO brand has made it possible for thousands of people to try out LRF and ultralight fishing, without breaking the bank, discovering the addictive fun of these methods. By all accounts, the HTO Rockfish UL remains one of the best selling spinning rods of all time. So, when my threat of taking George Perch fishing on the Kennet & Avon finally looked like a goer last week, we were both really looking forward to it.

It didn’t start out the most glorious of days on Friday. Both having a saltwater background, we couldn’t help but habitually watch the forecast through the week – it was windy! Too windy to go sea fishing for sure. But that was the first thing I wanted to get across – inland, things are much more accommodating – albeit with a long drive, early in the morning, from the south coast.

For a 100mph businessman, George has skills. I was interested to see how he attacked the day. He was rocking a new, prototype HTO rod. His Daiwa Exist was left in the bag today, with a HTO Lure Game spinning reel completing the set up. It was interesting to see George rig up with Drop Shot, while I stayed with recent form on Jighead.

Top of my mind was putting George on, not only his first Perch, but a nice one. It was with some kind of uncontrollable, primeval instinct that I flicked out my lure, while George was still setting up. As the lure flew through the air, I thought, “That’s a bit unfair. Should have let George go first.” And bang! Fish on. And a good one at that. I’d make a shocking guide! After a spirited fight I had a nice fish in the net. Man, was it fat. It measured 38cm. I actually had my scales on me for once and was surprised to see the fish reach 3lb exactly. Nice start! I eased my conscience by convincing myself that I’d passed some kind of confidence on to George. At least we knew they were there.

As the winter sun pushed above the far treeline, the smaller Perch gained interest in our lures. It wasn’t long before George was playing his first Perch. Boom. Smiles all-round. Job done. “Now let’s get a bigger one.”

Not long after his first fish, George had remembered that he had a bag full of soft plastic prototype lures – designed by his UK prostaff. I have to say, it was a highlight for me. Seeing George using his own kit and successfully catching fish on lures designed by his team was a bit special. The UK tackle industry DOES have a future.

The rest of the day panned out as you might imagine. We consistently caught fish, working on our presentations and learning about where the fish were hiding on this cold, windswept day. Regrettably for me, I didn’t manage to get George over the pound mark, but he came close and I’m not sure it mattered all that much. Perhaps we’ll see more of him on the bank now?!