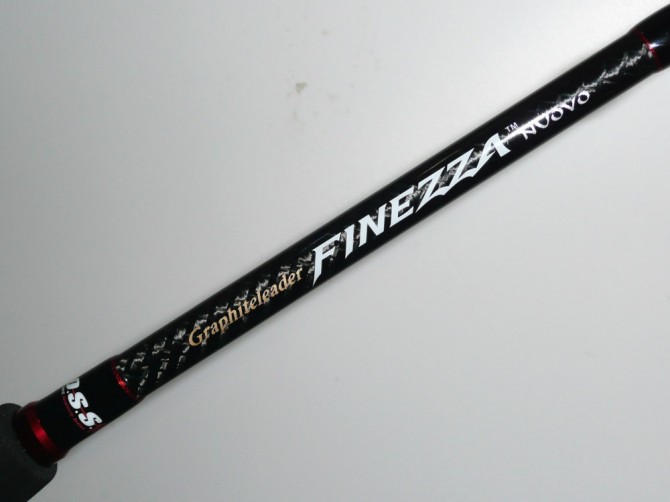 It was great once again to catch up with John and Melissa Barriball from Lure Heaven UK at the Tackle and Guns trade show earlier today. Knowing my preference for Light Rock Fishing, John had something special to show me – a very special LRF rod from Graphiteleader – the Finezza Nuovo GONFS-76-842UL-T-AL.

If you’re used to deciphering rod model numbers you may be wondering whether this rod is 7′ 6″ or 8′ 4″. Well, it’s both! One of the problems faced by LRF anglers is the compromise between better casting long rods and shorter rods for vertical fishing (for example, down the side of a quay). I don’t know anyone that likes having to carry more than one rod around on a session, so having one rod that fishes two styles without compromise is a great string to the LRFer’s bow.

The rod has a tubular tip (best for casting) and a fast action in either configuration. The GONFS-76-842UL-T-AL is rated from 0.6g to 8g. The build quality is fantastic and features Fuji K-Guides. The full specifications are here

Although you’ll see it lists 3 sections on the official spec sheet, you wouldn’t know it. Being Japanese, Graphiteleader went about fitting the additional 10 inch section in a highly innovative way. Rather than having to carry about an additional section, they built a system to allow transition between the two lengths quickly and easily, whenever you like – even while in use. As far as I could make out there was a friction grip that locks the section in either the closed or extended position. While you may be thinking ‘telescopic rod’ at this point, it’s a much smoother experience than that – there’s even some kind of spring inside to dampen the movement. I can’t do it justice in words. Get your hands on one as soon as you can.

From what John was telling me this is almost a world first. This rod is fresh off the production line and because of some canny Barriball logistics, John managed to get his hands on a few examples ahead of the Japanese market. How’s that – who said the UK was behind?!

If you’re not following Lure Heaven UK already, check them out on Facebook