With a gap in the weather and a club competition to fish I didn’t need any further encouragement to get another day’s boat fishing in with Adam Kirby aboard our boat ‘Drifter’ last weekend. Variety was the order of the day for our comp and that suited us just fine as it almost forced us to think a bit left of the middle and try stuff we otherwise may not have given much time to. It went without saying that we would lure fish for as long as we could in an attempt to rack up a few species without the need for bait but this is not as straight forward as it may appear due to the no mini-species rule and particularly big tides that day but with LRF gear ready we fished some rough ground at the start of the day hoping to find some fish. Pollack were the first to show and in big numbers and jigs were the killer lures, nearly every drop produced a hard fighting fish. 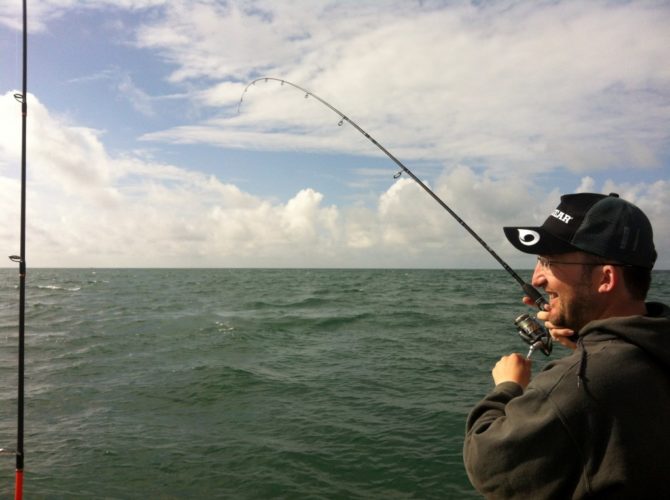 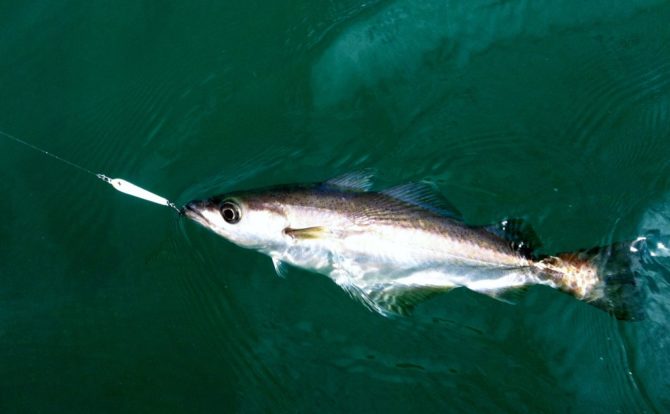 There was clearly a good number of fish around us and this amount of fish had to attract all kinds of species into the mix. Adam got a big take and was briefly attached to an altogether much better fish that took him into his backing before he got ‘done’, probably a Bass judging by the head shakes. Mackerel and Scad were also getting in on the act and just as we were thinking of a change of tactics to target a Wrasse this Ballan saved me a job proving they are just as willing as any fish to attack a jig as it flutters through the water. 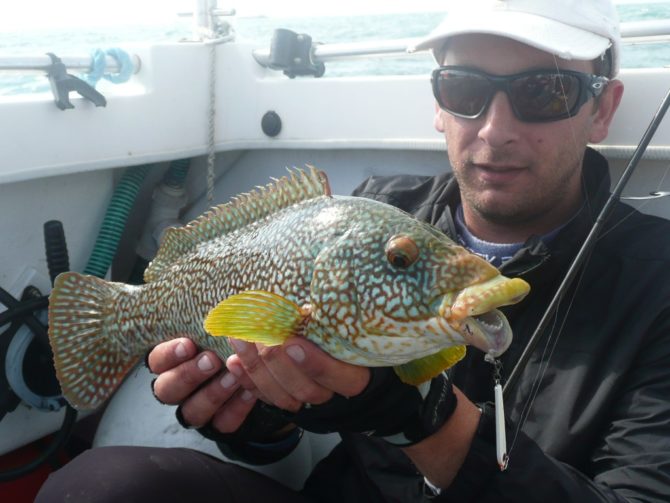 The above fish was actually an LRF personal best for me, I cant give it a precise weight but three and a bit pounds would not be far off, it certainly worked my Graphiteleader Calzante as hard as it ever has. My top jig of the day was the Daiwa Prisoner seen in the photos, at 7g its at the higher end of LRF jigs but it comes into its own when fishing vertically from a boat and the tide is starting to run, much bigger than this and its HRF territory but we have learned that LRF from the boat is a small window that we have to stretch to the limit and we try to eek out just one more go LRF’in before the tide defeats us for another few hours.

Over the course of the day we had to drop a bait down to try and scratch a bonus species for our comp’ and this paid off with a new species for me, this 3 Bearded Rockling was just shy of 2lb and would have been a great LRF capture but it took a strip of fresh Mackerel instead (we will be returning on a small tide to try and LRF one at a later date!). 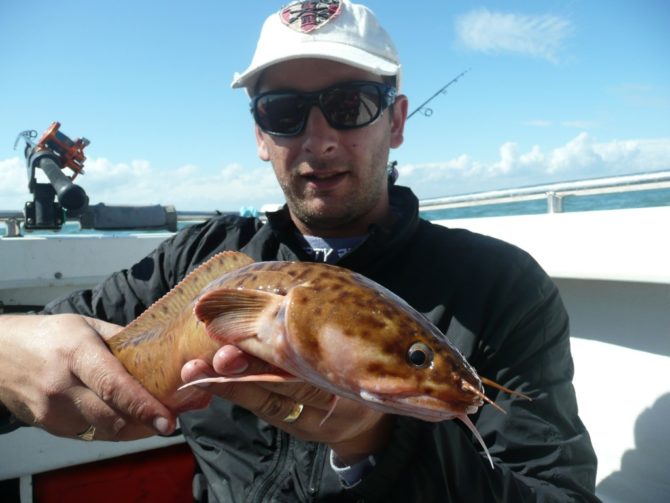 This same approach was about to throw up quite a fish! Despite trying to replicate our Bream on plastics trick from earlier in the year we had come up short, Pout were quick to grab our Bream intended Ecogear Bream Shrimps and it was time to throw out a strip of Mackerel on a size 4 Aberdeen and leave it alone until it rattles away with a tell-tale Bream bite. This is what actually happened. 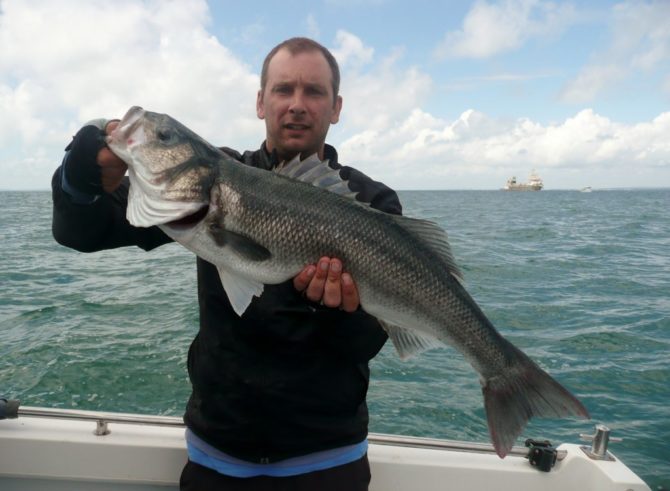 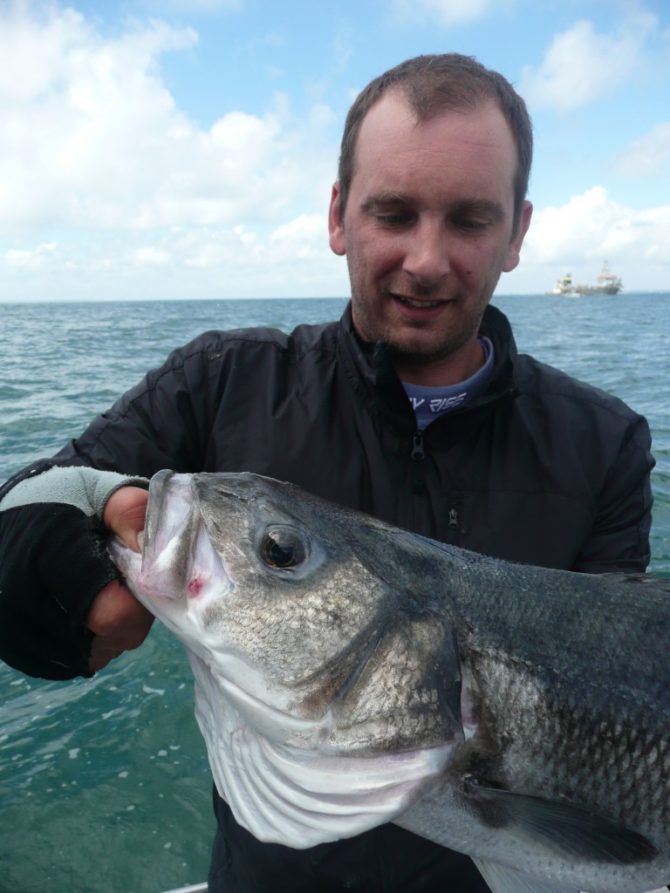 Now I have put ALOT of hours into Bass fishing this year, exclusively lure fishing and with very little return. Venues that last year produced regular fish have not produced this year for me and if I am being honest I was starting to bemoan my luck, my faith in fishing never waned but it was in need of a top-up! I would swap this fish for a lure caught fish of similar size in a heartbeat but life doesn’t work like that and if I could choose when and how to catch a big Bass I would have done it a long time ago so I am and will remain very happy to have caught a cracking 9lb 7oz Bass regardless of how it was done. It certainly gave me a run for my money and using a 6lb uglystick combo’d with an Abu 5500GR (one for the old skool) loaded with 10lb braid meant I didn’t have it all my own way.

Fishing is not without its little quirks and looking back I could have hung my hat on catching my PB Bass on bait despite putting all my eggs in the lure basket (my bait to lure fishing ratio over the past two years is easy 95% in lure fishings’ favour) but the final stat is the best. My old man now does his fishing on a cloud somewhere I guess and whenever I wet a line I cast an eye upwards and ask him for a favour, to sort me out with something special, after all that’s the least he can do for dying on me, anyway my fishing and general pleas have fallen on deaf ears until now. Yes he may have said ‘here son, have this on me’ and of course I wont bother him for a while as far as asking for fish is concerned but what actually happened is I caught a PB Bass one ounce short of my old mans PB, a fish caught not one mile away only twenty years previous. Cheers Dad!

A top day afloat with new species, PB fish and that beautiful Bass, add that to 2nd place in our comp with a total of 8 species and I have to be pleased, all but three species were caught on LRF gear proving that although bait fishing still has a part to play when I am out on the boat it is lure fishing that, whether its LRF or HRF, plays a bigger part every time I get to sea.