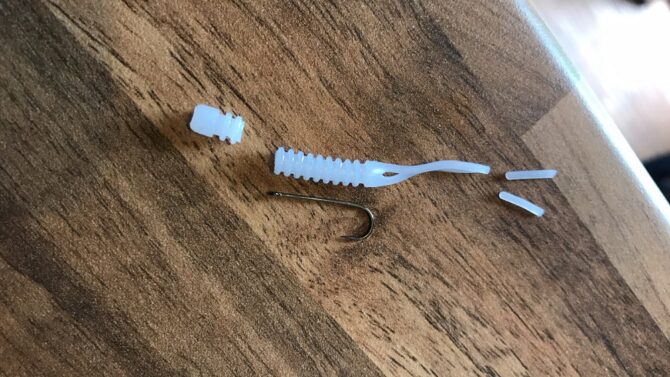 A quick tip for rigging the HTO Knight Worm and other small soft-plastic lures.

When targeting fish species with small mouths, generally speaking you’ll achieve the best hook-up rate if you position the hook-point somewhere near the middle of the lure – because fish attack either end of the lure (unless you’re fishing a moving bait, which isn’t ideal for many smaller mouthed species). But of course, with so many different hook styles, sizes and lure designs it’s not often that a hook or jighead will match up exactly with the chosen lure. My advice would be to tune the lure by trimming it to the perfect size.

I do this fairly often with the HTO Knight Worm. I aim to position the hook point at the ‘head’ in the centre of this creature-type lure. I then trim the fat end to the length of the hook shank or jig head. Which then makes the trailing tentacles / antennae too long, so I trim them back by a similar length, keeping the hook point in the centre.

This technique has allowed me to catch a huge number of species on soft-plastic lures. Way beyond what I would have caught if I had left the bait standard. You’ll see this trick adopted many times across this website. Try it.