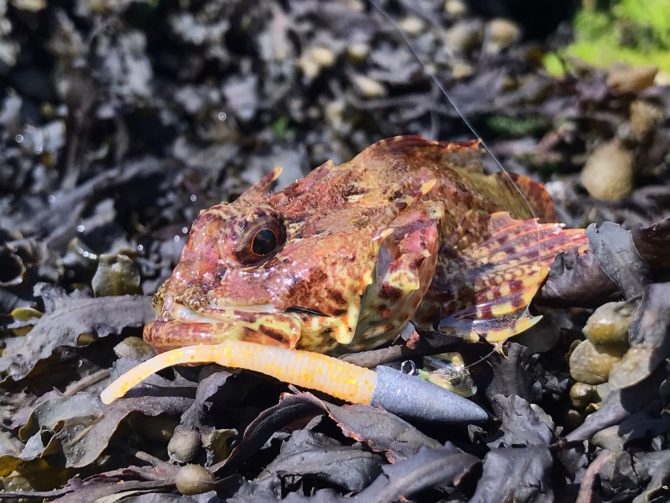 I really like straw tail lures for Sea Scorpions. I can see why they aren’t so popular. These lures don’t look like they do a lot and in reality, they don’t! But there’s something about strawtails, and straight lures in general. Mounted to an appropriate jig head you can really impart a great, darting action into them. Perfectly mimicking a fleeing fry or shrimp.

When targeting Scorpos and other minis, we’re not talking about huge, sweeping movements in the rod tip. Think about how far your target fish species is realistically likely to lunge to attack its prey. We’re probably talking half a metre at most. So the darting action ideally needs to be contained within an area of a 50cm cube near where you believe the fish to reside, to maximise your chances. In the case of Sea Scorpions this is on the bottom or a rock ledge that features dense bushy seaweed for cover.

Fishing in a confined area doesn’t mean you have to slow the presentation down. Far from it. You really want to wind the target fish up. The skill is to practice making small but powerful flicks in the rod-tip. Little but powerful flicks of the rod-tip can easily propel a little lure 50cm. The weight of the jig head controls the speed of descent. I play around with the weight on any given day until I feel I’ve got the balance right against the conditions. As ever, wind and tide play their part in the balance equation.

Anyway, try it. Fishing straight / straw tail lures is fun as it’s you that generates the action. Develop your own style and be extra proud of your catches. Enjoy!