2015 was another interesting year for light lure tackle. Interest in LRF and UL gear seemed to grow once again, especially on the freshwater side. But the biggest change last year, seemed to come from UK tackle brands and distributors. 2015 was the year that the UK tackle industry finally appeared to appreciate that LRF-style tackle wasn’t a passing fad.

With only a few exceptions from the worst of the bandwagon-jumpers, most of the new mainstream gear has been pretty good. You can’t knock an increase in availability and ‘marketing dollar’ to drive anglers’ awareness of this fun branch of our sport. But some brands received some lousy advice (assuming they got advice!) and presumed that ‘UK Dropshot’ was exclusively with 8-inch lures! Not the finesse approach that was doing the damage on the competition scene.

Last year, my own tackle choices were predominantly driven by small percentage gains, as I spent much of my fishing time concentrating on competitive Perch angling and the Street League.

2015 was also the first year I finally admitted I needed a 5g rod. More on that in a bit.

And perhaps more than ever, 2015 was the year where my tackle decisions were predominantly driven by a requirement, rather than general interest or discovery. In hindsight, I guess there comes a point when you start to understand what really matters and rather than blindly searching for success (or confidence), you start to search for things that fit the bill. It feels like this step-change has been driven by my focus on one particular area of lure fishing – specifically, light lure fishing for Perch in canals. Yep, pretty specific!

Having said that, I REALLY enjoy trying new tackle and revisiting less popular techniques. I fell for Caro (not Carolina) last year. To the point I regularly find myself sat at home, a good hour from the sea, desperately wishing I could fish Caro for a few hours. A canal technique it is not. Hopefully I’ll get the opportunity to share more about the technique this year, but of course you can research elsewhere in the meantime.

Rather obviously, the other big change for me was joining HTO / Tronix in October. Having left Ecogear at the beginning of the year and spending most of the season operating as a free agent, it felt good to join another team, with the aim to help others and be part of something bigger. That has rather obviously driven a lot of my tackle choices for the latter part of last year and beyond. But not absolutely everything. It’s business as usual at the overstocked ‘Kirby-tackle-emporium’.

Oh. I caught some fish over 12cm last year! That was cool ;0) Discovered some insane wrasse fishing closer to home. Fell in love with my GraphiteLeader ‘MR’ Monster Rockfish (thanks Matt!) and then the pinnacle of my angling year – possibly ever – the Sea Angler gig in Ireland with Jim O’Donnell and co. I realise we’ve been pretty slim on detail here (for obvious reasons), but flippin’ hell! Insane fishing. PB-o-rama. We got to use (read ‘abuse’) a load of our heavy gear that rarely sees the light of day. And some of which will never see the light again – such was the carnage. More on this in 2016.

Looking back then. With all the tackle I could talk about, it’s rod choice that stands out. Two rods gained much of my focus for much of the year. One £250+ Japanese hyper rod. One £38 UK-designed, entry-level special. Both with the same requirements from me.

The first entry on my blog is dated September 2010. But in all that time I never once felt like I needed a 5g rod. The bulk of 5g sticks I tried along the way were elastic-like solid-tipped rods and I just didn’t like the feel (or more accurately, the lack of). Then Martin at Lure Lounge made my life complicated. I’d forgotten all about the Reins Professional rod we’d seen at Nantes in 2013. Burying the experience as another lustful, but unobtainable encounter. Like gazing wistfully at an Italian sports car.

But now Martin was saying he could get me one and I had some dough in my pocket. Easy decision… In!

Perhaps in the same manner as we learn to love the quirks and imperfections of our nearest and dearest, there are a couple of things wrong with this now dearly loved hyper-rod.

‘Oldskool’ guides. Yes, SiC. Yes, genuine Fuji. But these are standard K design. Not the current UL fashion for KR.

A slightly awkward foregrip. Again, fashion. This time last year I was highlighting how awesome skeleton reel-seats were. None of that here. Outdated fashion perhaps.

But of course I’m being overly and pointlessly critical here. Like saying the rear visibility is bad in a Lamborghini Countach. Why the hell are you looking backwards? Drive!

Both of these, frankly shallow gripes fade away the moment you take the rod in your hand and go fishing with it. What a blank!

I remember the first, medium-sized Perch I struck into on the Ringer Pro and immediately I thought, ‘Jack’. I’m not exaggerating one bit when I say the increase in feel was that obvious from the word go. It was violently fast. In terms of feedback, there was more detail pouring into my brain than ever before. I’d switched to HD! I could ‘see’ hidden structure, identify line-bites and detect more fish than ever before. But fish the rod with a stiff arm / wrist and the fish receives increased feedback too. Less fish landed. In my mind, this rod definitely earns the title ‘Professional’. It’s a tool. Devote time to mastering it and it will give you the edge.

The Reins Professional is the rod I expect to break every trip. Painfully thin like a supermodel. It’s the rod that does nothing to hide my true intentions from the fish. But it was the rod that taught me the most about my fishing style in a year where I focused almost entirely on fishing for Perch, in canals, with Jighead. Without a doubt, it found me a few percent gains.

Oh. I even attached it to a Conger Eel at one point! > LRF Conger Eel

A beautiful rod that I wholeheartedly recommend. But move to it from an average, or even high-end solid tip and you might get a shock. If you’re not prepared to adapt, you might even lose a few fish. But the benefits are there for the taking. 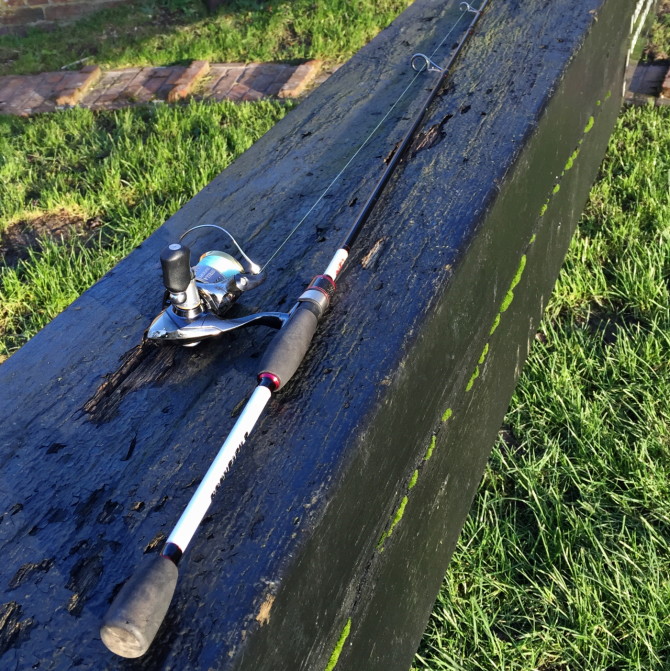 Perhaps a polar opposite from the last rod. Or maybe not. And perhaps a jump too far for some readers, but please bear in mind the journey my lure angling has been on over the last 12 months. A crazy ride from the intense focus of fishing a competitive series, to a national title, through to sponsored angler. Perhaps a few people doubt my integrity, or even sanity with this move. But I stand by my choice to join the Tronix / HTO team and be part of something bigger. I will always enjoy throwing shapes with the best rods Japanese craftsmen can provide. However the resulting price tag does nothing to promote the accessibility and general awesomeness of LRF / UL. This was never meant to be elitist. A fun pastime for all.

Back to the matter at hand. The Rockfish T UL may be under 15% the cost of the Reins Professional, but the performance is certainly nearer 80%. I can vouch for that having logged over 500 freshwater fish captures with this rod at the time of writing.

Not everyone can afford, or would even enjoy a fragile Japanese lure rod that threatens to self destruct at any moment. I get that. Which is why the Rockfish T was such a revelation when I joined HTO. I was starting to worry that the high-end trinkets I was peddling on my blog and Facebook, week in, week out, was in some way elitist. The exact opposite of what I wanted to achieve. So when I took hold of the thirty-eight-quid ‘T’ and applied what I’d learned from my efforts in the Street League, I was massively impressed by how little I thought I had lost. Yeah, it’s a little bit heavier and it doesn’t have Fuji stamped on the rings, but it’s a sweet little tubular blank. 7g and a genuinely fast-actioned rod. If you’ve done your rod-buying homework, waggled a few rods in the showroom, then you’ll know those credentials are pretty hard to come by – much under a hundred quid.

What else do I like? The user-interface is bang-on. In a natural hand position used by the majority of anglers, it allows you to get your index finger on the blank. Big points score in ‘feel’.

I come back to it, but durability is a big draw. You probably wouldn’t park your Ferrari in Asda car-park while you did the family shop. You’d be worried sick. And there lies a bit of genius about fishing with a £38 stick. It’s less stressful. I say that as a pretty clumsy individual. With urban / LRF specifically there’s a lot that could go wrong. Concrete, metalwork and razor-sharp barnacles all want to eat your prized carbon. Some of the most productive fishing spots are often hard to access. As you’re bunking over a fence, shimmying down to that ledge, or negotiating a slippery rock on all-fours, do you really want 60% of your attention focused on ‘your precious’? In my case, I enjoy fishing more without one little worry.

The rod casts well. The ‘test’ that I repeat over and over and over again is performed standing on the bank of the (standard width) canal. 1g jighead and tiny shad. 0.3PE and 4lb leader. Underarm flick to the far margin. Manage this repeatedly and you will frequent the Perch of your dreams. But it’s tricky and not all my LRF rods can perform this repeatedly. I’m pleased to say the Rockfish T can. A prerequisite to my perching, these days.

What else to say… Good spigot for a ‘cheap’ rod. No noticeable slack or knocking. Personally I would lose the white tip, but some will like it. And it’s pretty no frills with no hook-keeper and the rod bag is pants – but both can be rectified retrospectively should you so wish.