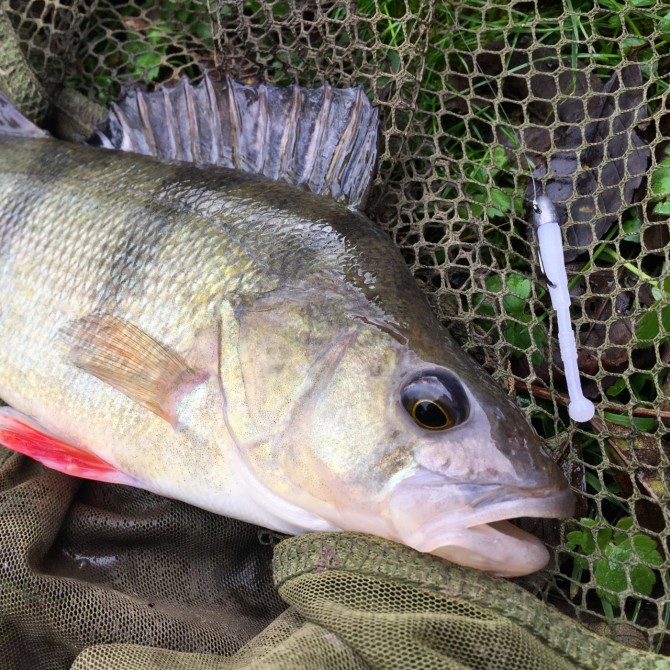 I’ve been lucky. In a relatively short space of time I’ve clocked-up over 400 Perch captures on HTO lures alone – all detailed and logged. I’ve hardly been systematic in my approach to lure testing though. To be frank, I’ve spent most time trying to replicate the rigs that have done me well thus far. Why reinvent the wheel?

As a lure angler with an LRF background, I was immediately drawn to the familiarity of HTO’s Flail – a thin, supple, bobble-tail-type lure. While the Flail’s design isn’t radical, it does have a few tricks. The segmented body makes it extremely easy to trim down the lure length, making match-the-hatch tweaks super easy. Digging a fingernail between the desired sections and pulling apart, results in a neat separation every time.

The same segmentation aids rigging too. It’s much easier to determine where your hook point should exit the lure for that perfect presentation – again and again. Let’s be honest, the rigging of your lure, on a jighead for example, is critical to how the lure behaves and consequently how successfully it fishes. So any feature that increases your accuracy, directly influences your catch rate. For instance, match the Flail with HTO’s Maikuro jighead in size 6 and measure out exactly three segments to achieve the perfect presentation. Childs play.

With the ease of adaptation of the lure’s length, it’s perhaps not surprising that the Flail has been racking up catches. At shorter lengths it’ll happily snipe off ‘wasps’ all day. But what’s surprised me is the number of bigger Perch that have been fooled when fished at full length. One scenario in a recent session really hammered home the Flail’s strengths and promoted it to one of my all time faves…

I cast a chartreuse Flail to the far bank, 90-degrees across the canal, under a large bush. The action that’s been working for me is a hopping retrieve with short pauses. At full length this lure creates a beautiful arc when fished in this manner. As the lure hopped down the first step of the canal I got that oh-so-pleasing ‘donk’ on the rod tip and lifted into a nice 30+ centimetre fish. After a quick photo I repeated the same cast and amazingly achieved the exact same result. Another 30+.

Would you believe it, the third cast again attracted another, similar sized Perch from this honeyhole and I’d amassed nearly a metre of beautiful stripiness in just under 5 minutes! Of course, while you can only catch what fish are there, there’s a great amount of satisfaction to be had from a lure that can repeatedly and stealthily work its way into a shoal and trick fish after fish without spooking the group. That’s true finesse.

PS. This is also the lure I caught that cracking 41cm 3lb 2oz Perch on recently. Confidence is peaking