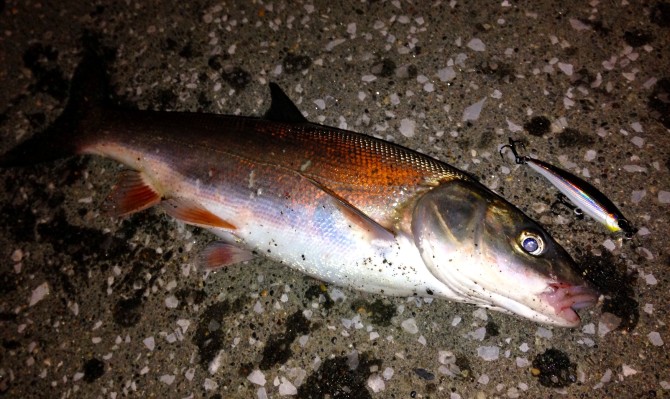 Perhaps not my finest hour in terms of fish care, but despite his run-in, my first Ugui (Japanese Dace) went back strongly after a rushed photo.

Well happy with getting on the freshwater scoreboard in Japan, although I was sure I was fishing a saltwater estuary at the time!

We were staying in Abashiri and I managed to sneak out for an hour under the cover of darkness to where I’d seen a few fish topping earlier, under the street lamps of a road bridge. It wasn’t long until I convinced a fish that my Ecogear MX48 was tastier than all the other baitfish being washed down river. After a nice fight this large Ugui was in hand. It struck me as familiar. Kind of part chub, part barbel. Nice looking fish.

After another Ugui of similar size I foul hooked one of the bait fish. Regrettably I couldn’t get a good photo. It wasn’t a fish I had seen before. At first I thought it was an elver but I’m not entirely sure it was. It was completely transparent. The only visible feature was the eye. Fantastic looking creature. Maybe a Glass Eel?

« My First Mebaru» Mother of all Butterfish