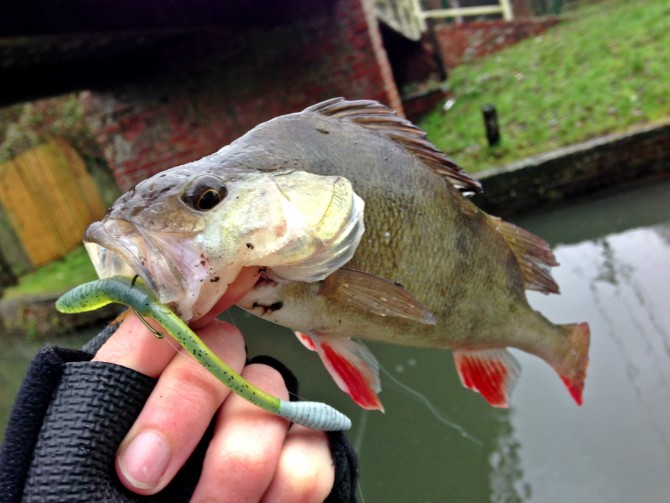 I was determined to go drop shotting for Perch today, despite the weather. If anything, my local canal seems to have become clearer with all this rain we’ve been having. By the sounds of it, others haven’t been so lucky.

Anyway, the plan was to wrap up warm, get out to my usual spot on the Kennet and Avon Canal and fish bigger baits than I have been lately, in the hope of connecting to a bigger Perch. Tackle was a simple drop shot rig built of 5lb fluorocarbon. A 3.5 gram drop shot lead with a size 4 Owner Wacky Hook (Camo Green) fixed about 6 inches above. I fished the same lure all day as it worked straight away. A new lure and lure manufacture for me. The 4″ Squirrel Tail Worm (SS Shad) by Big Bite Baits. It’s a fair size but smaller fish can still inhale it as it’s very supple. It fit the bill perfectly.

Drop shotting can be good this time of year as fish aren’t as active as they are in the warmer months. With a drop shot rig you can fish a lure stationary where you know the Perch live – in snags / under bridges etc – this will give you more time ‘in the zone’

Think I ended up with five or six fish in the end with the last one being the one I was after. I’m not very good at guesstimating weights of Perch but I’d say it was about two and a half pound or so. Very good fun on light tackle.

More of the same tomorrow I hope.