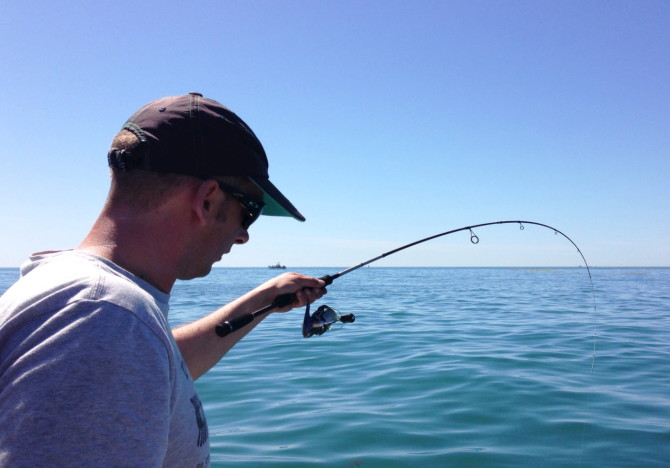 My understanding of rod design and rod performance has accelerated since I started fishing for Perch in my local canal. Unlike the sea, conditions are more often than not suitable for throwing the tiniest lures. We’re often talking 1-inch plastics and jigheads under a gram. To me, it’s this style of fishing that has amplified the importance of using a balanced outfit. I thought I’d share where my head is at currently. Subject to change.

As we know, there are two key types of UL rod design. Tubular and Solid Tip.

Tubular means the blank is manufactured in one-piece – sometimes broken into sections to aid transportation.

With a Solid Tip, a solid section of blank is spliced into the tubular section, at the tip. Because there is a join between the solid and hollow sections, vibrations sent down the rod to the angler can be softened. Feels more like elastic than steel. The impact of this effect is often magnified with a lower quality blank. Expensive blanks reduce this effect.

Solid tip rods are great for inhaling eaters like Perch or Bass. The same loss of feel for the angler actually turns into a positive as the fish also feels less (resistance) and is able to take a bait more readily.

If there is little to no ‘slack’ in the system – for example vertical drop shot – the elasticity of a solid tip should help catch rate. With inhalers like Perch, confidently able to take the lure fully into their mouths with less resistance. However, if you’re fishing some slack – for instance the sink and draw method – then you may find that the added feel of a tubular blank outperforms the benefits of a softer solid tip.

Generally speaking, solid tips aren’t as good at casting. They’re less likely to load smoothly and consequently casting accuracy can be reduced. In some instances the tip will fold up during the cast and make the effective length of the rod shorter, which generally translates to shorter casts (although this may not be important to you).

For me, there are two key attributes required for success with a rod. ‘Feel’ and ‘Balance’. Feel being the level of ‘activity’ transmitted from the lure to your hand, allowing you to react to this feedback. And Balance being the rod’s ability to control the tiny lures, required by UL disciplines. Within this is obviously casting itself and the action you impart upon the lure.

Speaking of which. Tubular tipped rods are better at working hard lures. If you’re trying to impart an action upon a lure, you want your efforts to be translated down to the lure, not lost in the rod tip.

Generally speaking, if you splice a solid tip into a rod design, you’ll lose something in the feel. But that’s not always bad.

Other things to consider…

The manufacturing process of tubular rods has limitations in the achievable lightness and low end casting weight (balance). At the lightest end of the scale, tubular rods get very expensive, very quickly. A 5g tubular rod is a very rare and specialist bit of equipment. It offers the very best in sensitivity (feel) and balance for using light lures. But at a price.

Top end tubular rods at the lighter end of the spectrum are fairly fragile things, as well as expensive. Not the best combination of attributes!

I said I thought solid tips suited vertical drop shot fishing better than tubular. One exception stands out for me. Fishing for Zander. You could argue that UL rods aren’t best suited to Zander. But I think more specifically, soft tipped rods aren’t suited for Zander. They don’t inhale their prey, they snap at them, using their teeth to pin them. So a soft tip isn’t necessary like it can be for inhaling species. But you do need to hit them pretty quick and set the hook in that bony mouth. So a tubular rod can give you the edge in both feeling the hit and setting the hook.

Work in progress, but what appears important is that you choose the right weapon for the right quarry and technique.