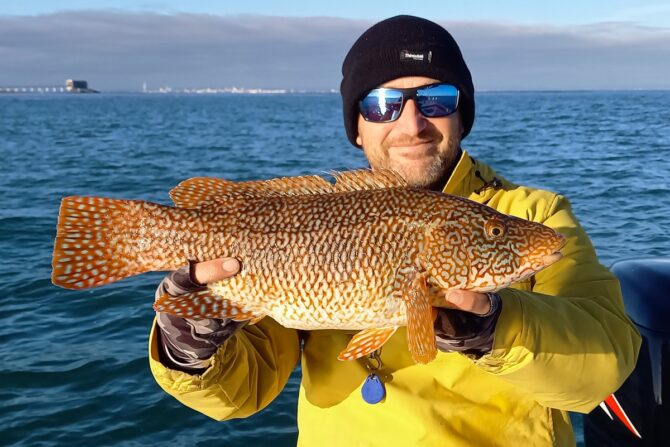 This last Autumn was a little different for me. Instead of spending my time up at the reservoirs fishing for freshwater predators, I started a focused campaign, fishing a shallow water mark just off the South Coast for Ballan Wrasse, Pollack and Bass. My weapon of choice was Darting Method.

Okay, to be honest, this very nearly didn’t make it to the blog. At best, it’s only borderline LRF. More akin with Hard Rock Fishing (HRF). And fishing from a boat. But the method is too cool not to write something about it. And I have been using 5g and 7g darting jig heads so in the right ballpark at least. For the record, I have been using the most-excellent 3-15g Nebula Light Gamer rod from HTO for this fishing. It’s been a total blast.

Why do I like Darting Method? I should explain that I’m not using it in the same way that you might have seen the Wind Method for bass in saltwater. Same lure type, but instead of casting way out and darting the lure aggressively back to me somewhere in the mid water column, I’m fishing much slower and more vertically. And because Ballan Wrasse are my key target species here, I’m keeping the lure close to the bottom to maximise my chances. I’ve seen Japanese anglers refer to this as ‘Bottom Wind’. (No sniggering at the back!!)

To be clear, I’m not letting the lure sit on the bottom. Not even hopping it along the bottom (that would get expensive with open style hooks). All the wrasse I catch on this method are hitting the lure off the bottom. Forget everything you perhaps thought you knew about slow and static wrasse fishing. This is an active method. The wrasse are killing the target, rather than foraging. Even in relatively cold water. For reference, the coldest water temp I’ve caught wrasse using this method is 12.8C.

Anyway, the whole point of this is that this method allows you to generate a lot of movement in a relatively small area. That’s important for Ballan Wrasse as they very rarely win a sprint against the other saltwater predators. Do Ballan Wrasse like a moving, even fleeing, bait? Definitely! Are they going to dash 10m to hit it? Very unlikely. So I’m trying to keep the bait moving – darting – but I’m trying to keep the lure within roughly 1m of the bottom (or the top of standing weed). In terms of the pace of guiding the lure back to me, I’m trying not to be much quicker than the tide itself. So the lure is darting on the spot as much as it can be, left and right, while slowly making its way back to me with the tide. I tend to favour places where the tide isn’t ferocious. But you do need some tow.

The attacks are pretty savage, like most active methods. Ballan wrasse, as you probably know if you’ve fished for them with lures, tend to stun their prey with a single hit. We affectionately call it, ‘the tonk’. When a 40+ centimetre Ballan charges out of its ambush position and commits to whack a 4-inch bait, it’s quite a thing! Electric, in fact. They shoot to kill. I totally buzz for this stuff.

In terms of the tackle, my lure of choice has been the now discontinued HTO Midi Stick. It’s that classic triangular profile you find on all traditional, JDM darting lures. And while I used to think that the Midi Sticks were a little on the soft side for a darting lure, this has worked to my advantage with wrasse as they are supple enough to fold into the Ballan’s relatively small mouth.

With regards to darting jig heads, I’ve been trying to source the cheapest 7g darting heads I can find. Nothing special as I will lose a couple every session. My preference is triangular darting heads that match the lure profile, although I’m sure bullet heads would also work.

I always fish barbless for wrasse. If a Ballan is more likely to eject a barbless hook, then I’ve not detected it. The last thing I want to be doing is using tools on a Ballan. There’s not much room past those gnashers. And I respect these big fish. They’re old. And I want them to continue growing older.

Lure colour is, as ever, mainly about light and contrast. Fishing into Autumn you really have to think about the level of visibility down there in 20ft of water, with a low sun (if any at all!). It’s no different to any other lure fishing. Just think about it. The colour white is often your friend.

6-8lb FC leader. Seems light for the often gnarly conditions, but I’m above the fish, fishing from a boat. I only ever bust off if my line has been damaged and I’ve not spotted it before re-casting. Always check your leader after each fish or snag.

And that’s pretty much it. If you’re interested in this method and want to continue reading more about it, I recommend this blog I did about Micro Wind Dart Game. It’s the smaller cousin, but the principals are the same.